Link to my IMDB page. 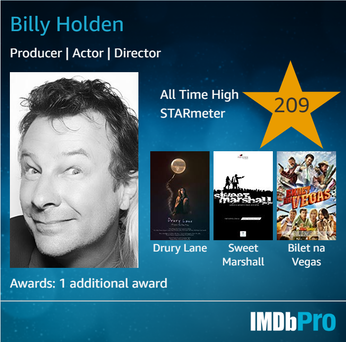 Link to my IMDB page.
Australian-born Billy Holden attended acting school in Dallas Texas in the 1980's where his acting partner was the up and coming star Lou Diamond Phillips.  Billy then went on to work on the TV Series “Dallas”, and the TV Movie “Pancho Barnes” with Valerie Bertnelli.  Billy then worked on the set of “Stormin home” with Gil Gerard.  Billy was then selected as one of the hosts for the TV show Kids for Kids in 1991, along working on various TV commercials.

Billy Holden is currently an Actor, Director Executive Producer a Co-Writer of the new Amazon series "Proper Manors" arriving the Summer of 2018.  Also recently cast as the lead role in the Feature Film "Lone Soul".  Billy is in Pre-Production of a Glen Simister's Feature called "How Horrible We Are" in the role of Bloom. .  Billy also servers on the SAG-AFTRA AZ-Utah Board as the Vice President for Utah.

Billy has had  the opportunity to work again with Gil Gerard on the set of J.A. Steel’s feature “Bloodfare”. Billy was the co-star in the feature film "Sweet Marshall" alongside Paul Winchester and Australian Logie recipient Paul O'Brian.  Billy has also worked alongside  Geena Davis, Harry Cook,  and Andrew Lancaster on the set of “Accidents Happen”.  Billy has also worked with Emma Roberts and Jo Jo on the set of “Aquamarine”, and most recently with Kevin Kline in Larry Kasdan’s feature “Darling Companion”.

Billy has been selected as one of the 2010 brand ambassadors for Lifetime products, featuring Dragonfly Kayak’s.  Billy just in the last few months has wrapped on the set of Lynne Van Dam’s feature “Drury Lane” as the evil Det John Barnes, and was just cast as one of the leads in J.A. Steel’s new comedy pilot.  In the last year has worked with Kevin Kline, Sam Sheppard, Luke Goss, and Diane Keaton.

Billy has been working in front and behind the camera for the last 32 years, and now is in the Top 1000 listed Actor/Directors on IMDB.

Now based in Hollywood California, and Atlanta Georgia, Billy works as an Actor, Director, Producer, Presenter, and Writer and is poised to continue his very exciting journey.